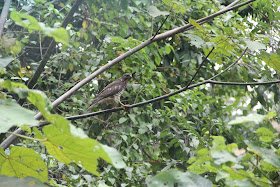 Well if you hadn’t noticed after one full week of daily posts I just couldn’t keep up the pace once Sarah arrived. I imagine the same will be true when we return back to Dallas. Since it’s my blog and no one is paying the rent with it, I guess I can write just about anything and write it anytime I want to or have the time to. You might want to check out Sarah’s blog for a lot of the things we did on the remainder of this trip because frankly if I don’t write about them down the next day, the whole trip ends up being a big blur to me. I did see two separate but yet still linked events the other day in which I thought I would share. The first being beautiful in quite a different way than the second. As you might have heard we have some chickens at Jose’s house. We buy little chicks and feed them for 3 months and then they get eaten for dinner. Well, 2 of the full grown birds had been spared by Jose for some reason and had been given liberty to wander about the property by day and then locked up at night as to keep the creatures of the jungle from getting an easy meal. One of the chickens was black the other white, not that color makes any real difference, we eat all colors down here! As I was making my way back up the mountain the other morning I see both of said wandering chickens high tailing it up the road back to their coop. I pass the slower white one putting my truck between the two. I then took notice of how well the black chicken ran; again,color making no difference in the speed of chicken running as far as I know. I then caught a glimpse of something in my rear view mirror and turned around just in time to see a hawk swoop down and attack the white chicken. Feathers were flying as the hawk pecked at the chicken to subdue it. I paused for a second thinking I should break this senseless attack up but then came to my senses, this was how it was supposed to be. Nature in its purest form. This bad ass hawk, probably one third the size of the white chicken ( btw the black chicken took off double time after witnessing the demise of his bro) then drug the still flapping yard bird off into the jungle. I imagine to try and eat in peace before Sarah’s beloved vultures saw the kill and moved in for sloppy seconds. This was really something else to see. This bad mofo hawk did was he was supposed to do, instincts kicked in and he got down to business. 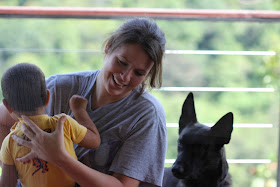 This brings me to the second event. Jose brought little Oscar up to our house because I guess he must have been hounding his papa to come play with Sarah. He loves him some Sarah . So in the same manner but much less violent of course, Sarah did what her instincts told her to do. She played with a little boy who loves her back just as much.
When we dropped him back off at his house and headed down the mountain close to where I saw the hawk do his thing I noticed a glow about Sarah. She just got done doing her thing too.
admin January 1, 2012March 1, 2018 Leave a comment on Instincts